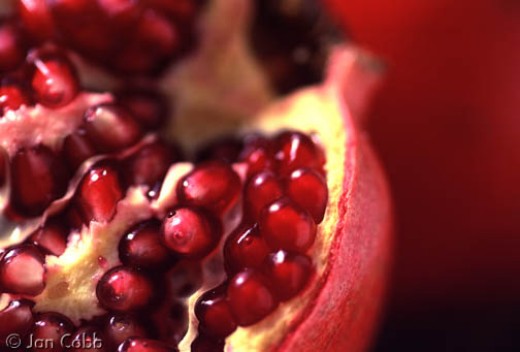 The Chinese New Year is being celebrated this week and I’ve been learning about the culinary traditions related to the holiday. So far, I’ve learned that tangerines and oranges, as well as chickens are symbolically consumed.
I’ve decided to write this post on yet another symbolic Chinese New Year food:

“Pomegranates are a natural for Chinese New Year. They’re filled with colorful seeds for fertility and are a bright vibrant red, which represents happiness and repels evil spirits. They’re also good for you, with an abundance of antioxidants and vitamin C to help you recuperate after the celebrations are over. You probably already know that pomegranate juice is a great pick-me-up and base for a number of alcoholic beverages (it’s often made into a sugar syrup called grenadine), but pomegranate seeds are also refreshing in salads and perk up the color and sweetness of meats when added to marinades. They make an eye popping garnish too, especially when paired with slivered carrots, purple cabbage or orange segments. If you want to experiment, peel a fresh pomegranate and sample the seeds. They have a predominantly sweet flavor with just a slight sour aftertaste. They’re wonderful as a fresh, cold dessert all by themselves.” Source

The pomegranate has been used throughout history and in almost every religion as a symbol of humanity’s most fundamental beliefs and desires, including life and death, rebirth and eternal life, fertility and marriage, abundance and prosperity. Almost every aspect of the pomegranate has come to symbolize something … its shape, color, seeds, juice. Source

Pomegranates are a symbolic food for Rosh Hashana, the Jewish New Year. Jewish tradition teaches that the pomegranate is a symbol of righteousness because it is said to have 613 seeds, which corresponds with the 613 mitzvot, or commandments, of the Torah. For this reason and others, it is customary to eat pomegranates on Rosh Hashanah. Moreover, the pomegranate represents fruitfulness, knowledge, learning, and wisdom. The pomegranate has been mentioned in many ancient texts, notably the Islamic Quran, Homeric Hymns and the Judaism’s Book of Exodus, and is valued by many cultures for its beauty. The pomegranate is often seen in paintings and statues of the Virgin Mary and the baby Jesus. In Christianity, it’s a symbol of resurrection and everlasting life.

In the Indian subcontinent’s ancient Ayurveda system of medicine, the pomegranate has extensively been used as a source of traditional remedies for thousands of years for diarrhea, dysentery and intestinal parasites as well as stopping nose bleeds, gum bleeds, and toning skin. It is high in antioxidants and Vitamin c, as well as dietary fiber. It is considered to be a good source of B5, potassium, tannins and flavonioids. It is said that pomegranate juice, like aspirin, can help keep blood platelets from clumping together to form unwanted clots and has been created in the Journal of Urology, July 2005 for helping to address erectile dysfunction!

juice from half a lemon

Cook the quinoa in water for 20 minutes on low flame. Then rinse with cold water and place in bowl. Add the celery, walnuts, salt and olive oil and mix slowly. Then add the pomegranate seeds, cranberries and lemon juice and mix slowly (do not use a wooden spoon). Transfer to a serving dish and sprinkle scallions on top. Source

How have you enjoyed pomegranates?!