Nancy Judd of Recycle Runway strives to change the way people live on the earth through innovative exhibitions that showcase sustainable fashion designs made from trash. Her couture fashions have been sponsored by international organizations including Delta Air Lines, Toyota, and Target, and one of her pieces was accepted into the Smithsonian’s permanent collection in 2011.

In March of this year, I was faced with an interesting proposition. I was contacted by someone representing Dasani, the Coke-produced and distributed bottled water company. They had determined that I was an “influencer in the eco-space” and wanted to honor me as one of five eco-enthusiasts in a social marketing campaign launched this Spring. In exchange for $10,000, Dasani would videotape me giving 12 eco-tips that would be posted on their Facebook page monthly; I would post ideas for sustainable living every month; and I would send links of these posts out to my community as well.  What a deal, no? 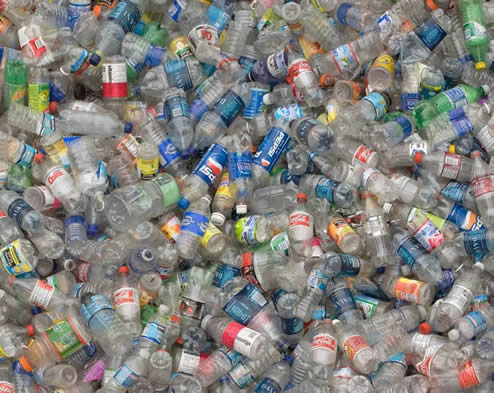 First off, I was flattered by the compliment—I did not know I was considered an “influencer in the eco-space”. Cool! Next, as a small business owner, I was excited by what a $10k cash infusion could do for my business and my environmental education mission. But then, the reality of the offer set in: even though they assured me that I would not have to endorse the use of bottled water nor Dasani, I knew I would be giving an implied endorsement. After a bit of angst, I decided to turn down the offer and gave this general explanation: “Because of numerous environmental and health concerns, I just can’t, in good conscience, imply that I encourage people to drink bottled water.” I am writing this blog-post because I want people to know why drinking bottled water is a bad idea. So, here are the five “cradle-to-grave” reasons why I refused this $10,000 offer:

The rapid growth in the bottled water industry means that water extraction is concentrated in communities where bottling plants are located. For example, water shortages near beverage bottling plants have been reported in Texas and in the Great Lakes. Farmers, fishers, and others who depend on water for their livelihoods suffer from the concentrated water extraction that causes water tables to drop quickly. Additionally, approximately a third of bottled water sold in the world is filtered tap water.  Two gallons of water are wasted in the purification process for every one gallon that goes into the bottles!

Fossil fuels are primarily used to package water in bottles. The most commonly used plastic for making water bottles is polyethylene terephthalate (PET), which is derived from crude oil. Making bottles to meet Americans’ demand for bottled water requires more than 17 million barrels of oil annually, enough to fuel more than 1 million U.S. cars for a year. Worldwide, some 2.7 million tons of plastic are used to bottle water each year.

In contrast to tap water, which is distributed through an energy-efficient infrastructure, transporting bottled water long distances involves burning massive quantities of fossil fuels which creates pollution that contributes to global warming. Nearly a quarter of all bottled water crosses national borders to reach consumers, and is transported by boat, train, and truck.

Even though people perceive bottled water to be safer and/or healthier than tap water, tap water must meet more stringent quality standards than bottled water. Furthermore, while drinking water systems must publish annually the results of water quality testing, information about the drinking water source, and known threats, bottled water companies do not. Additionally, phthalate chemical compounds are used to manufacture plastic water bottles to render them flexible. Laboratory studies have linked some phthalates to problems with male fertility, and with obesity, and other health problems related to hormonal imbalances. Several phthalates have been banned in children’s products for this same reason. There is concern that these chemicals leach from the bottle into the water we drink, as well as the groundwater after disposal.

Seventy-five to eighty percent of plastic water bottles used in the United States become garbage or litter. Incinerating used bottles produces toxic byproducts such as chlorine gas and ash containing heavy metals. Buried water bottles can take up to 1,000 years to biodegrade.  A large percentage of the plastic bottles that do get recycled are sent overseas, using additional  fuel and creating more pollution just to be down-cycled into lower quality products. Also, unrecyclable plastics are disposed on-site polluting someone else’s environment with our trash!

I would like to mention that Dasani and Coca-Cola have created PlantBottle® packaging which currently contains up to 30% plant-based material. Their vision over the long-term is to eventually bring to market recyclable plastic bottles made from 100% plant-based waste. I appreciate their efforts in this regard, but, for the reasons I have listed above, I still do not feel comfortable encouraging people to buy and drink bottled water.

When One Door Closes Another Opens

As they say, “when one door closes another opens.” One month after I turned down this $10,000 offer from Dasani, I received a $10,000 fellowship from the National Audubon Society, called TogetherGreen. I’m very excited to start this new project and will be sending out details soon!

Sandrine’s Notes: I met Nancy at the Art Institute of Southern California, which has since been renamed the Laguna College of Art and Design, in 1988. I’ve seen the foundations of Recycled Runway evolve since then, and even modeled in one of Nancy’s fashion shows. I feel blessed to have supported her unique approach to raising awareness about the importance of conservation by photographing many of her garments in 2007. I am extremely proud of her educational efforts. Her blog post inspired me, once again, to have the courage of my convictions. I believe we nourish our spirits when we do.

Would you decline ten thousand dollars?